Not the Beginning or the End

SYSTEM FAILURE.  A simple two-word error message summarizes virtually every major news headline over the past five years.  In fact, it is difficult to name a single public institution which we hold in high esteem.  Government.  Healthcare.  Education.  Religion.  Even libraries are being brought into question regarding their relevance for the future.

How did we get here?

Economic historian Carlota Perez says that we’ve been here before, many times in the past.  For over two centuries, we’ve seen new technologies wreck and repeatedly rebuild our social institutions.

Each technology boom follows a pattern:  an initial breakthrough, followed by speculative frenzy and misallocation of resources, leading to a collapse in finances and public restructuring, eventually transitioning into a period of broader deployment, productivity and rising affluence.  The process finishes with near-universal integration of revolutionary technologies into existing systems. 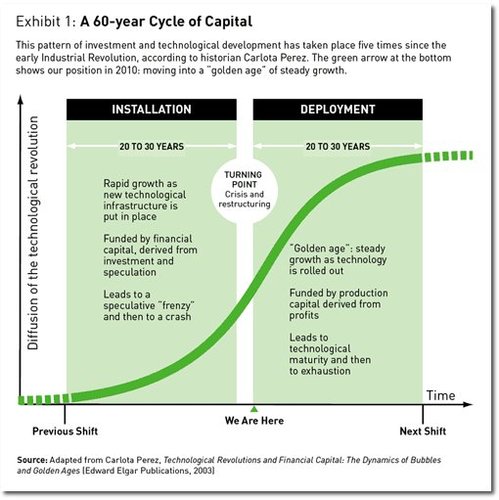 We’re not in the beginning or the end of this cycle, but in the middle.   The “messy middle” is a turning point when public finances are still in a state of disarray, and a significant gap exists between the efficiency of our institutions and the productivity of our newest technologies.  It is a time when the public feels the most dissatisfied and the least confident.

This particular turning point may have been delayed, as government efforts to “fix” the financial crisis have interfered with the mechanisms that restore equilibrium via what economist Joseph Schumpeter refers to as creative destruction.

At the World Future Society Conference last summer, a friend and colleague of mine, Patrick Tucker, presented material from his upcoming book, The Naked Future: What Happens in a World that Anticipates your Every Move.  He comments that we are in a time of “declining institutions and rising individuals.”  In the Information Age, nothing empowers individuals more than the internet.

So, what if institutions were as easy and convenient as online shopping at Amazon?  Can schools develop personalized curriculums just as easily as Netflix finds good movie recommendations? What if hospital costs were competitively-priced, like hotel rooms on Hotwire?  Will peer-to-peer lending networks become more successful than traditional banks?  Is it possible that a network of autonomous electric vehicles might eventually solve our public transportation issues?

We are still a few years away from the next golden age, but at least we can see it on the horizon.