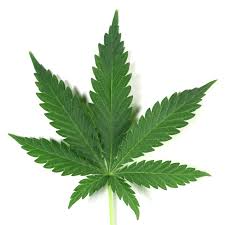 This is a question that I never expected to ask, "Does marijuana deserve a place in your portfolio?"  Call it a legacy of the Baby Boomer generation, or a desperate attempt by states to generate new tax revenues.    Either way, the decriminalization of marijuana is a trend that is simply too big to ignore.

Since California first legalized medical marijuana in 1996, a total of twenty states plus the District of Columbia now allow access for those with documented medical needs.  The two "Superbowl States" of 2014, Colorado and Washington, now allow ownership for recreational purposes, as well.

Colorado expects to take in $180 million in tax revenues during the first 18 months of legalization based on forecast sales revenues of $610 million.  When possession was fully legalized, the lines were so long that many dispensaries ran out of product, or engaged in rationing to keep their waiting customers mellow.

President Obama (who apparently inhaled quite a bit in his earlier days) recently removed the federal limitations that made it difficult for state-legal marijuana shops to open bank accounts.  This should improve financial transparency at any number of levels.  Marijuana stocks have since become a day-trader's paradise; some of them have advanced as much as 200% since the beginning of the year.

Looking at this from the perspective of an investment  manager, there are some intriguing questions worth asking:

* How will the marijuana industry be classified by S&P?  Healthcare, basic material, or consumer staple?
* Are marijuana investments suitable for socially responsible portfolios?  Which ones?
* What are the political risks of investing in an industry which is legal in some states, but still illegal under federal law?
* Will big tobacco step-in and buy up the large growers, or will marijuana follow the micro-brewery model and focus on regional preferences?

What we know for certain is that the industry is still very, very early in the game.  MMJ Business Daily estimates that the legal marijuana industry in Washington and Colorado is about $1.5 billion and will grow to $6.9 billion in sales by 2018.   They forecast that the total market in the U.S., if fully legalized, would exceed $46 billion. 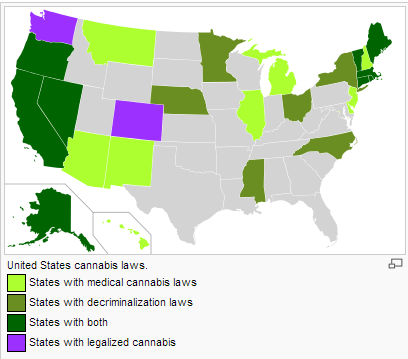 At least half of the marijuana companies that I have reviewed are still "penny stocks" and trade for less than $1 per share.  Most are still cash flow negative.  Many have gone public via a maneuver known as a "reverse IPO" (never a good sign).  One photocopied its earnings reports and posted them on their company website.  Others simply don't bother with SEC filings.  As a group, they resemble a financial train wreck somewhere in the Wild West of legalization.

With that in mind, there are at least four different angles for speculators:

Companies in this space include CannaVest (ticker: CANV), Cannibis Sativa (CBDS) and Medical Marijuana (MJNA).    However, U.K.-based GW Pharmaceuticals (GWPH) seems to be the most interesting choice here.  Their treatment for multiple-sclerosis (Sativex) has been approved in 24 countries and was the first cannabis-based prescription drug to reach the market.

Equipment Suppliers: Even people who choose to "grow their own" need the right equipment.  In some regards, this is the most mature and competitive part of the industry.  Aerogrow (AERO) and Growlife (PHOT) both focus on home markets, while FusionPharm (FSPM) builds modular growing rooms for larger-scale production.  Greengro Technologies (GRNH) specializes in hydroponics equipment, along with Terra Tech (TRTC).

There is no way to "play it safe" in marijuana stocks.  Most of these companies are growing their revenues quickly while simultaneously burning through cash.  The recent level of media attention has created nosebleed valuations relative to actual revenues, suggesting that nobody should feel completely confident investing or trading here.

It is all just speculation.  Don't get lost in the haze.

(Disclosure: Information contained herein is for educational purposes only and is not to be considered a recommendation to buy or sell any security or investment advice.  Mr. Lee is the Founder of Strategic Foresight Investments, a registered investment advisor.  Any securities mentioned in the preceding article are solely mentioned as examples in connection with the information provided. Listing of these securities are not a buy or sell recommendation.)