The Great Controversy of 2030

One of the peculiarities of professional futurists is that we get excited (and often worried) about things that aren't on the news yet.   We call these "weak signals." If you go past the chatter and listen closely, you can get a sense of tomorrow's headlines.

The "big story" on the media right now is that with the breakthroughs of fracking, America is rapidly moving toward energy independence. We've defied Hubbert's Peak, and oil production is now getting very close to levels that we haven't seen since the 1970's.

If you dig much deeper beneath the surface, there is an even more abundant source of energy that we haven't even tapped yet.

Deep underwater (and sometimes under layers of artic permafrost) you'll find crystalized chunks of natural gas in the form of methane hydrates (sometimes called "fire ice").  Yup, this is ice that bursts into flame when you put a match next to it. 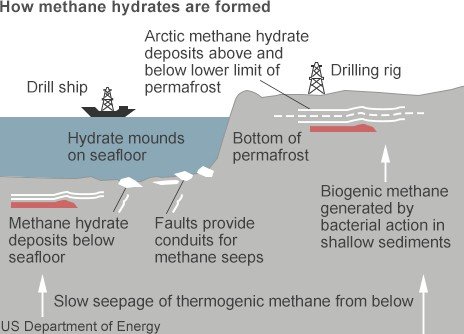 It has been estimated by the U.S. Geological Survey that somewhere between 10,000 trillion and 100,000 trillion cubic feet of natural gas exists in this form - in cold climates and under high pressure.  This represents more organic carbon than the world's existing sources of coal, oil, and conventional forms of natural gas combined. These global reserves could generate enough power to supply the U.S. for over 1,600 years.

The Japanese leading the effort to reclaim these deposits. Given few natural gas fields of their own and a post-Fukishima reluctance to embrace natural power, methane hydrates permit access to abundant fuel supplies of their own. Their experts estimate that commercial levels of production will start sometime between 2020 and 2030.

As you can see from the map below, methane hydrates can be found worldwide - suggesting that this will be a boom that benefits everyone.

But there is a rather sizeable risk here.  On a molecule-by-molecule basis, methane is 20x more effective as a greenhouse gas than carbon dioxide. In fact, it is believed by some that the release of methane hydrates from oceanic warming triggered a 6°C increase in temperatures during the extinction event at the end of the Permian era.

Given the possibility of inexpensive energy from the ocean, or fighting over ever-dwindling supplies from conventional sources, we may find this to be a politically acceptable risk - but not without considerable debate.  Why is this?

We have a lot of smart guys that are REALLY GOOD at drilling holes in things. We have an existing infrastructure that favors natural gas for power generation. And, generally speaking, natural gas is a clean-burning fuel. This suggests that methane hydrates will be the "next big thing" after the fracking boom is over.

If you found a magic lamp at the bottom of the ocean and a genie came out - would you be able to refuse his offer?